Rounding Out Stars in a Time Warp

The end of the year is always a good time to take stock of projects underway and make plans be inspired for the coming year.  I'd like to devote a post to projects finished in 2015, but that will have to wait until after the first of the year.  We're taking off later today for a short road trip, so I've spent my blogging time prepping projects to work on in the truck.

I do have some pictures of the last of my Stars in a Time Warp blocks.  I've wound up with 88 finished 4" blocks.  I have a plan for setting them, but may need to add a few additional blocks to make the quilt top work out properly.

These blocks are my versions of Roller Print Clouds & Storms.  There are lots of fun varieties of this style of fabric - I just don't have many of them in my stash.  Yet.

Next, we learned about Coral & Seaweed prints.  I was happy to use some of the green fabric on the left - I think it has been in my stash for over 15 years!

The last episode of Stars in a Time Warp was for Shawl Prints, Stick Prints and Cracked Ice.  I had a great example of a shawl print (left) and some blue cracked ice. 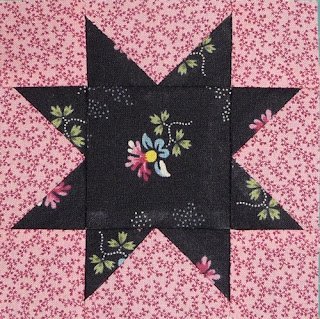 Back in week 41, the theme was Neon Novelty fabrics.  I didn't have any at the time, but in the following weeks managed to find a small print that sort of fit the bill.

I'm happy to have all my Stars in a Time Warp blocks finished before the end of the year.  I wish I was one of those fast-working people who already had their top pieced, but I'll have to wait for 2016 to realize that plan!

And now Dear Husband is home from the office and it's time to hit the road.  Happy New Year to all and see you on the flip side!

I thought two of my Rainbow Scrap Challenge projects for 2015 would be ready for finishing by the end of the year.  However, after counting up finished blocks and contemplating quilt layouts, I'm not sure I'm happy with the number of blocks I have ready. 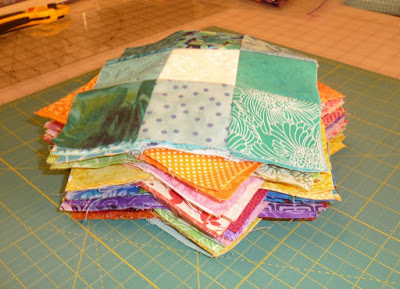 There are 64 of these 9 patch blocks, which finish at 6 inches.  I was planning to color block the 9 patches in groups of 4 and add white sashing between the resulting blocks.  When I did the math for the finished quilt size, I decided I would be happier with a larger quilt.  My plan is to make additional blocks in a reverse pattern - white surrounding one colored piece in the center.  I already have plenty of miscellaneous 2 1/2" squares cut thanks to Bonnie Hunter's Scrap User's System.  I can cut the appropriate sized white scraps and have everything ready to use as a leader-ender project for 2016. 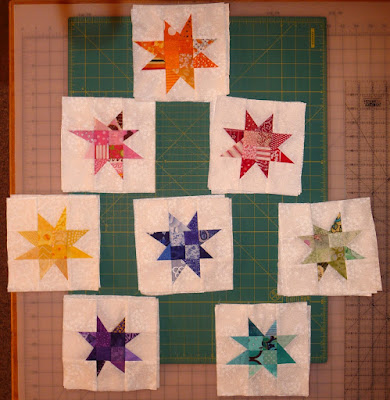 These scrappy Maverick Stars are ready to be turned into a quilt top, although I'd like to do a little playing before I make a final decision on the setting.  My plan is to use a straight set (I don't care for how these look when set on point) with blank squares between each block.  Rather than just using plain fabric squares, I wanted to experiment with string-pieced squares using white and off-white fabrics.  I haven't made the playtime to do that yet, so the stars will have to wait a bit longer for their final assembly.

I never considered these string blocks (or spiderweb blocks) to be an "official" RSC project, but they are definitely scrappy and on their way to being finished!  I have 9 more blocks to stitch together and then I can start laying them all out for final assembly.  I think they'll probably need a little trimming, too, as some of them have slightly concave sides, despite careful pressing. 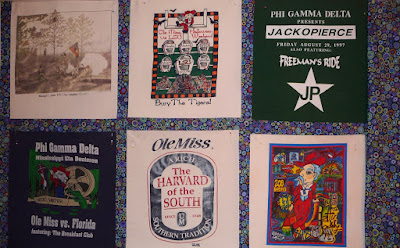 So with the prospect of all that fun, scrappy sewing ahead of me - would you believe I am procrastinating?   That's because this t-shirt quilt has to be finished before I can focus on any scrappy quilting.  Chris, the quilt's recipient, finally agreed on this Kaffe Fassett print for the sashing and borders.  I had to order the fabric, but now everything is ready for me to finish cutting and sewing.  My reward will be free fabric playtime, but it's hard to just go get started!

Other Rainbow Scrap quilters are also finishing up their projects and you can see the results at Angela's Soscrappy blog.

This post is inspired by Julie at Julie's Quilts and Costumes.  Her Throwback Thursday post for today features a gorgeous Log Cabin quilt with alternate blocks featuring Santa figures.  Julie made her quilt for her husband, who has a large collection of Santa figures and memorabilia.

As it happens, my Dear Husband also collects Santa figures.  His birthday is in December, Christmas is his favorite holiday, and somehow the collection started and grew and grew.  When I saw a quilt kit using the Santa panel in 2006, I knew I had to make the quilt for my husband.  The quilt kit was on offer at Bright Hopes Quilting - a favorite stop when I traveled across Lake Pontchartrain to visit friends. 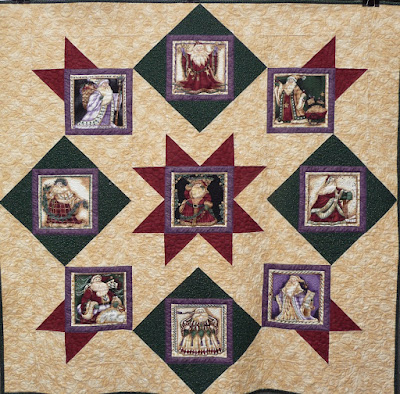 The Santa blocks are arranged to form a wreath with a center star.  I liked the simple, but effective arrangement and I knew I could finish the piecing quickly (although not in time for Christmas that year). 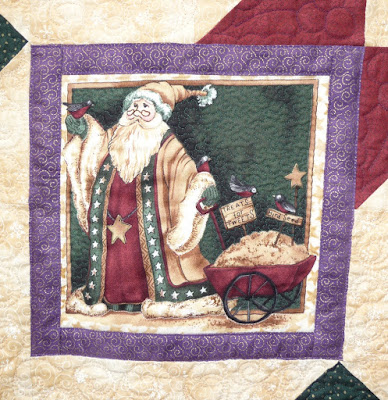 The Santa panels were framed in a purple metallic print. 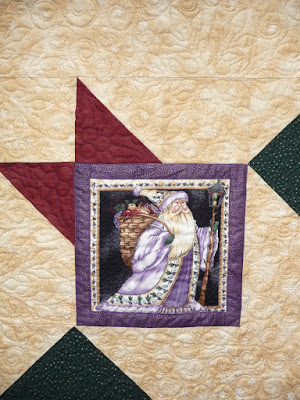 I sent the finished top to my friend Annie Kusilek for quilting.  The main quilting theme is snowflakes, but there are swirls and holly and stipple quilting as well. 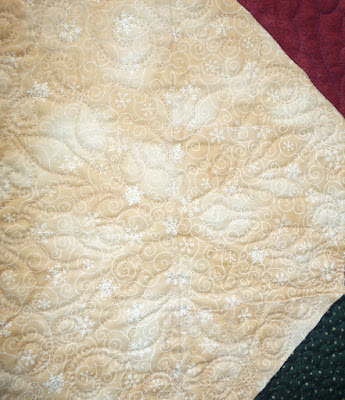 Annie does all her FMQ on a treadle sewing machine.  Yes - you can do amazing FMQ using an antique or vintage machine and people-power! 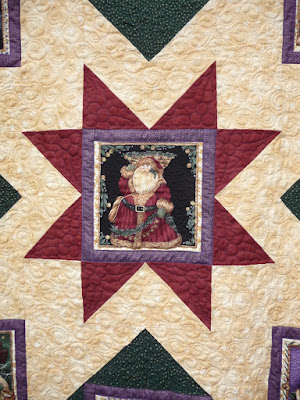 I didn't really notice this until I was taking pictures at lunchtime, but the center red star is reflected again in the center gold "star".
And now the quilt is hung on display for the Christmas season; if only the rest of my holiday decorating was so easy!

Audrey - the Pied Piper behind Quilty 365 - is sponsoring a link-up for those of us who are following her circular lead.  It's a fun opportunity to share one's circular logic and be inspired by the circular fascination of others.  Are you getting dizzy thinking about all those circles? 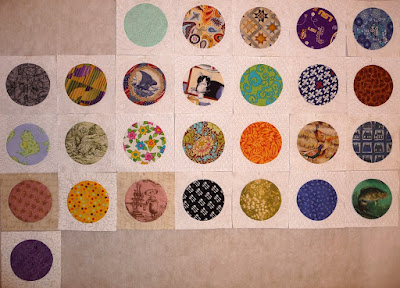 I started stitching circles on November 4th, and I've circled through 27 days now.  Not all of my circles are stitched, but they're prepped and ready to go.  I laid mine out using Audrey's suggested Monday through Sunday grid, but I'm not sure I see any patterns in my fabric choices.  Yet.  I have such a large toile fabric collection I considered "Toile on Tuesdays", but after looking at the fabrics, I decided most of them were not the right scale for 3" circles.

I have general ideas for some things I want to try with my circles, but I haven't gotten a round tuit yet.  I really enjoy hand-appliqueing the circles to their respective backgrounds, but I also think using one of my hand-cranked sewing machines for the applique would be fun.

As for Daily Fabric Therapy Meditation - let's just say that there have already been many days where the act of choosing fabric and/or hand-stitching it have done wonders for my mood and general outlook on life!   I'm looking forward to this year-long journey, no matter how circular!