I received one of the best Christmas gifts ever in 1988 - my youngest son was born December 14th of that year.  I knew I wanted a Christmas-themed baby quilt to welcome my little one home, but I couldn't find a single ready-made baby quilt with a Christmas theme.  I decided I would have to learn to make quilts, so my December baby would have a Christmas quilt.  I signed up for my first quilting class at the local quilt shop and I have been in love with quilts and quilt-making ever since. 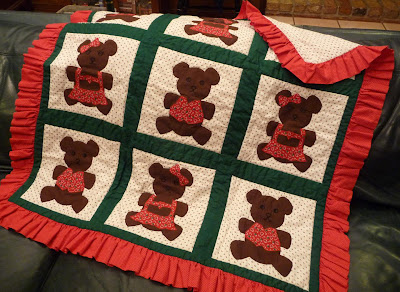 This is the Christmas quilt I eventually made for my son.  I began the quilt in 1988, and I sadly confess I did not finish it until December, 1992.  Poor boy was 4 years old by then! 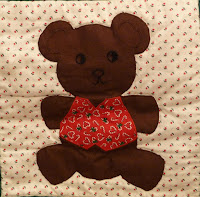 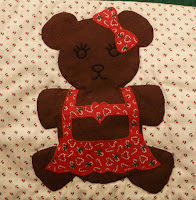 If I remember correctly, I used coloring book drawings to create the teddy bear appliques.  I used a fabric fusible to anchor the fabrics and machine satin-stitched the raw edges.  The facial features were hand-embroidered.  I outline quilted around the bears and stitched in the ditch around the blocks.  The finished quilt measures approximately 40" x 40".  Not sure what possessed me to put a ruffle on a little boy's quilt!

A few years later, I decided my oldest son needed a Christmas quilt, too.  I remember picking out some of the Christmas fabrics for his quilt at Mae's Fabrics, a discount fabric chain where I loved to hunt for bargains.  I've become something of a fabric snob since then, but at that time I had yet to be burned by poorly-made fabric! 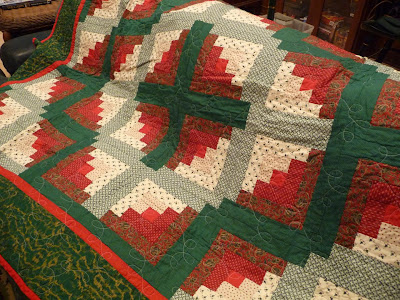 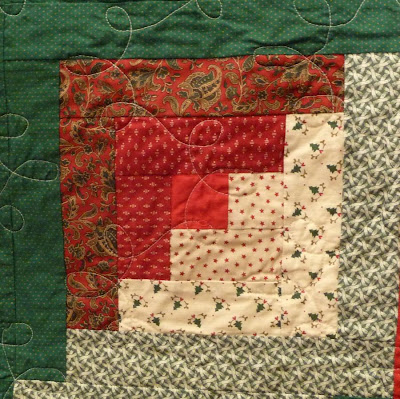 Do any of these fabrics look familiar to you?  I don't have an exact date for this quilt, but the fabrics are definitely late 1980s to early 1990s.  I wanted the quilt to have an ageless appeal, so I didn't use any novelty fabrics.  The quilt was long-arm quilted and measures 54" x 76". 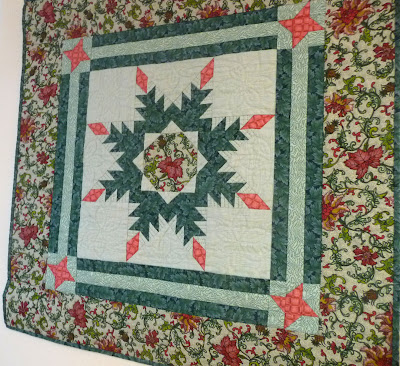 This feathered star wall-hanging was a gift for my mom, circa 1997.  The feathered star was inspired by a Radiant Star pattern in Marsha McCloskey's Christmas Quilts (That Patchwork Place 1985 - apparently reprinted by Dover Books).  I remember hand-piecing the star while my kids were at swimming lessons in the summer and hand-quilting the quilt during soccer practice in the fall! 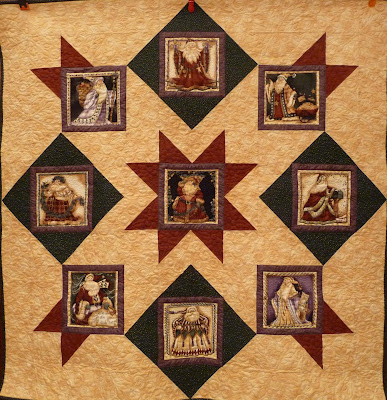 More recently, I gifted my Dear Husband with this old-fashioned Santa wall-hanging.  My DH was also born in December, and his love of Christmas led to an ever-growing collection of Santa Claus figures.  We've run out of display space for more Santas, but we haven't covered all the walls yet!  The pattern was a kit from a local quilt shop:  Bright Hopes Quilting. 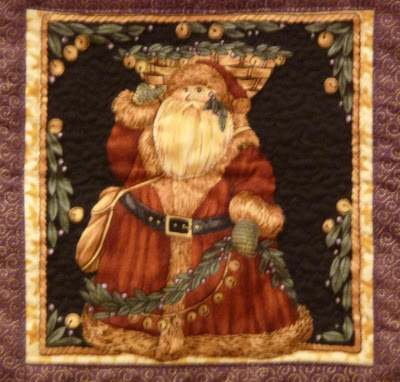 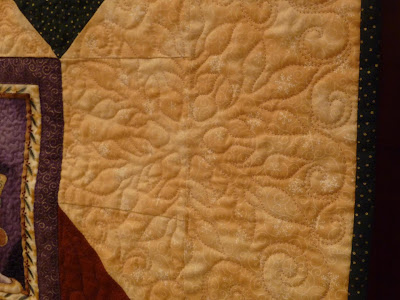 Wishing you joy and that special serenity of spirit that occurs during this most inspiring time of the year!

The second block for the Civil War Tribute BOM is called "Thunder & Lightning".  I like the name (I grew up in the thunderstorm capital of the US) and I like the block.  I was not so happy with the cutting and piecing method provided in the instructions. 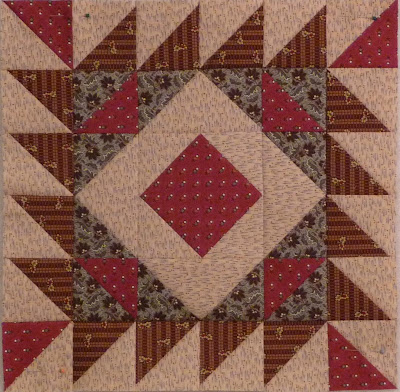 All of the half-square triangles (HST) in the pattern were made by one of the most time-consuming methods I know.  The HST were made by cutting individual squares, then cutting those squares on the diagonal, then piecing the resulting triangles together based on color/fabric.  Yes, only four of these blocks were needed for the quilt, but it still would've been faster to use some speed cutting and piecing methods.  I was afraid to veer too far from the written instructions, as running out of fabric before completing the blocks would not be a good thing. 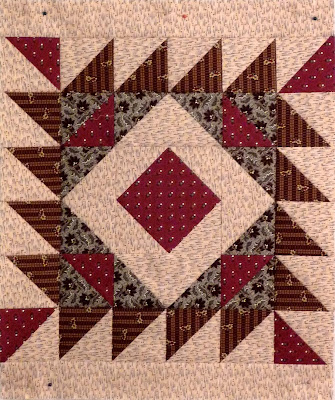 Still, I finished all four blocks and added the spacer strips.  These blocks commemorated the first battle of Manassas, or Bull Run as Northerners are want to call it.  First Manassas was the first land battle of the Civil War.  You  may recall it from history class as the battle where many of the fine folks from Washington, DC rode out in their carriages to watch and picnic.  When the tide of the battle turned against the Union army, many panicked soldiers overran the picnicking citizens in their haste to retreat to Washington.  One of New Orleans' native sons, Gen. Pierre Gustave Toutant Beauregard, was the commander of the Confederate army.

The Deep, Deep Sea baby quilt is done!  I spent a marathon day watching movies and hand-stitching the binding.  As soon as the binding was stitched, I washed and dried the quilt to get rid of the spray starch and pet hair.  It also helped achieve that well-loved quilt look!  We will probably go by to visit the new bambino and deliver the quilt tomorrow after the Saints game. 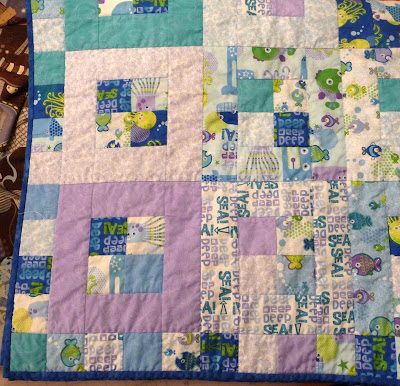 Quilt after the binding is stitched; washed & dried. 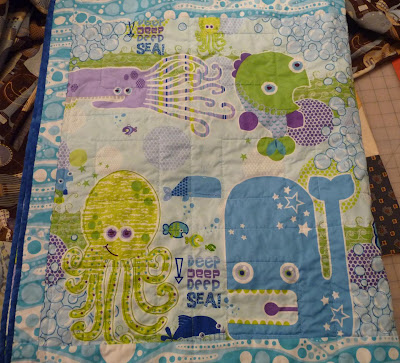 Back of the quilt featuring the Deep, Deep Sea panel. 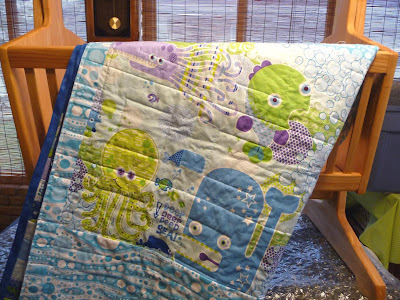 Prior to stitching the binding, I snapped a couple of pictures of the quilt and the cradle my DH made for Baby Jourden. 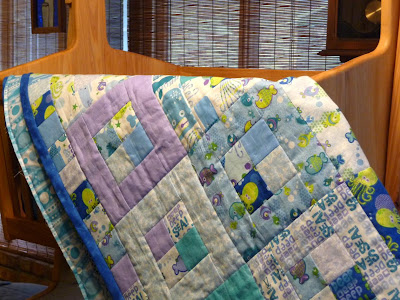 The cradle has already gone to Baby Jourden's house, or I'd have a picture of the cradle AND completed quilt!

I'm thrilled this quilt is finished; this is the second baby quilt I've made in the past 2 months.  I'm ready to devote some time to other quilting projects!

I recently finished piecing one of the most aggravating quilts I've ever worked on!

I fell in love with a fabric group - Floragraphix IV by Jason Yenter - at my LQS.  I loved the saturated colors and retro, flower-power prints. 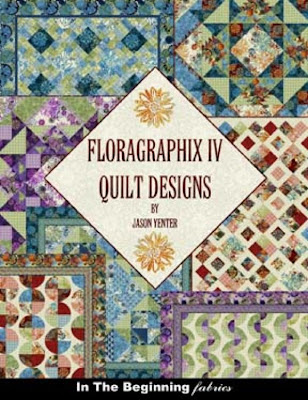 After a quick thumb-through of the accompanying pattern book, I chose a pattern that appealed to me and used the large-scale prints to advantage: Exotic Star. 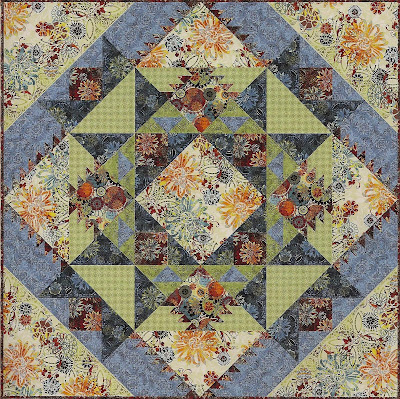 As I worked on piecing the quilt, I realized there was one huge headache with the pattern.  Almost all of the triangles in the pattern are cut with the bias on the outside edges.  I used a lot of starch to help stabilize the pieces.  I sewed carefully, but still did some ripping to achieve the most accurate piecing possible.  Measuring and judicious trimming were also of great importance. 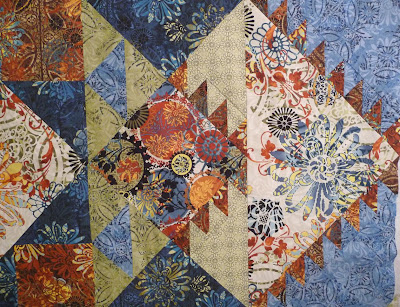 These triangles didn't come out too bad - if you don't look too closely. 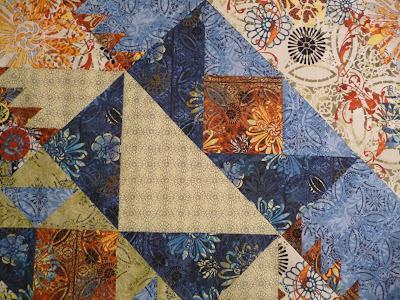 The fabrics are as board-stiff as I could make them with starch! 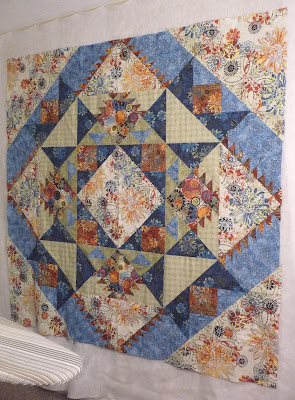 Here's my finished version (roughly 72" x 72").  I only hung it on the wall long enough to take pictures as I'm afraid the bias edges will stretch.  Not sure how this will be quilted; I'm definitely taking it to my longarm artist, although I'm not sure she will appreciate all the bias edges, either!

Pieces of the Past: New Home Sewing Machine Co.

I confess I have been in a bit of a funk lately and haven't felt much urge to sew.  I've finished about three-fourths of the quilting on the Deep, Deep Sea baby quilt, but otherwise have no quilting output to share.  I hope to finish the baby quilt by the end of the week - indeed, the precious baby arrived about 2 weeks ahead of his due date, so now there's a little more pressure to finish!  Once the baby quilt is done, there are several projects in various stages that should bring some satisfying sewing time.  I look forward to that!

One of New Home's favorite advertising themes was using "Before" and "After" illustrations of the virtues of their sewing machines.  An early image for Johnson, Clark & Co. shows Mother using a "noisy, hard-running old machine" which agitates the children and the dog.  The next image shows the peaceful household restored after Mother purchases a New Home sewing machine.

Another before and after card pictures a fox who lost his tail in a trap.  He uses a New Home sewing machine to sew his tail back in place so it will never come loose again!
A variation on the Before & After card is known as a "Hold to Light" card.  The image is designed so that when the viewer holds the card up against a bright light, the image changes.  Upon holding this card to the light, the woman sewing by hand is transformed into the beautifully dressed woman sewing with a New Home sewing machine.
The verse on the card is actually from "The Song of the Shirt", a composition by Thomas Hood which described the tedious and tiring life of seamstresses before the invention of the sewing machine.  Sewing machines were advertised as time savers that would benefit women's health and well being, as well as allow them to devote more time to their husbands and children. Of course, the converse of this was that many men feared women would have too much time on their hands if freed from the labor of hand sewing!

One of my all-time favorite New Home advertisements is a four page pamphlet.  The pamphlet cleverly illustrates an amusing Before & After scene demonstrating an unusual quality provided by a New Home sewing machine.