I've been off in Florida, sharing some holiday happiness with my mom & sisters.  It was great to see everyone and enjoy a bit of sunny Florida weather.  They even indulged me and let me poke around a quilt shop while we toured old downtown Winter Garden!

I've returned home to more typical gloomy & chilly December weather.  We're at our camp, but I've got a couple of sewing projects here, so I can blissfully ignore the weather. 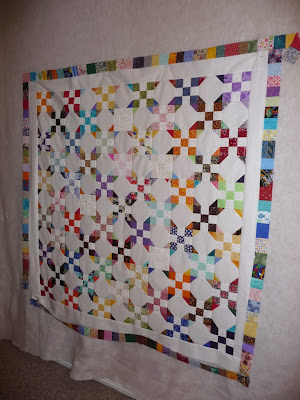 Before leaving for Florida, I was able to complete the free-form scrappy border for the 9 patch and snowball Rainbow Scrap Challenge quilt.  The 9 patch blocks were made for the 2012 RSC, and I made the scrappy snowball blocks during 2013.  I just need to stitch the scrappy border to the quilt and add another white outer border and the top will be complete. 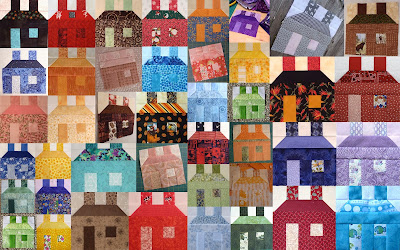 I didn't want to do a year in review blog post, but I thought it would be fun to make a collage of all the Rainbow Scrap Challenge houses I made this past year.  I enjoyed looking back at the scrappy fabric and New Orleans houses that inspired all these blocks.  I hope 2014 provides the inspiration to assemble them all into a quilt!

I hope everyone has a festive and safe New Year's Eve and I look forward to sharing more sewing and quilting fun with everyone in the coming year! 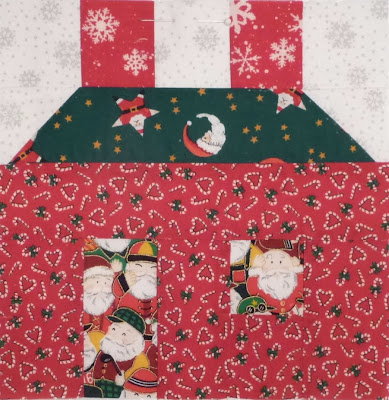 I really must do some serious scrap-busting of Christmas scraps.  I was planning to make a Christmas log cabin quilt for my youngest son, but DH has asked for a red, white and blue log cabin quilt.  I don't think two log cabins in one year is a good plan, so maybe Bonnie Hunter's Strip Twist pattern would make a good Christmas-themed scrap buster!

The design wall was empty earlier this week, so I threw all the Rainbow Scrap Challenge happy, scrappy houses up for a picture.  Unfortunately, I deleted the picture from my camera before saving it.  I currently have 48 rainbow-hued house blocks and several ideas for how to assemble them.  I'd like to see the houses get assembled in 2014, but for now they are marinating while I come up with a plan. 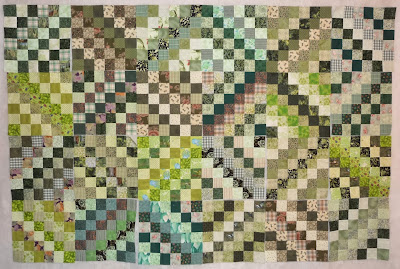 After I took down the house blocks, I put up my green Trip Around the World blocks.  This project is meant to use up some of the vintage, dark green fabric in my stash.  Other shades of green have found their way in as well.  I probably have enough green fabric to make two of these, one in dark greens and one in lime greens.  I need to make another 12 blocks for a decent sized quilt, then I'll decide on whether to mix shades or not.

In preparation for the new year, I've cleaned the cutting table and put away fabric, organized scraps and UFOs.  I won't have much time for sewing in the coming week, but I have been trying to cut some strips and squares cut for 2014 projects.  I'm looking forward to sharing all that soon!

I think the happiest thing I can say about my sewing activity this week is that I've made a big dent in cleaning off my cutting table!  As the year comes to a close, it's always nice to clean up, clear out and get organized for a new year of sewing/quilting fun.


There are a lot of project ideas running through my head, both newFOs and UFOs, but I have not committed to a plan of attack yet.  At best, I really want to make a trial block to test out my 2014 Rainbow Scrap project.  I'd like to accomplish that in the next week, but I don't know if I'll be able to carve out the time.  I should be out braving the crowds to finish Christmas shopping right now, but the siren call of fabric is keeping me home! 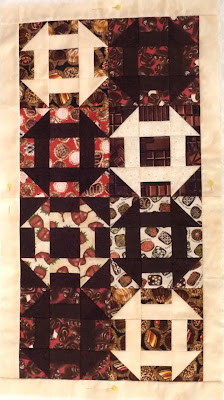 I did finish a chocolate churn dash small quilt top, probably best used as a table runner.  I had hopes of machine quilting this in time to give as a Christmas gift, but that's not going to happen.  It's not as wonky as it looks - I just have a problem holding the camera straight! 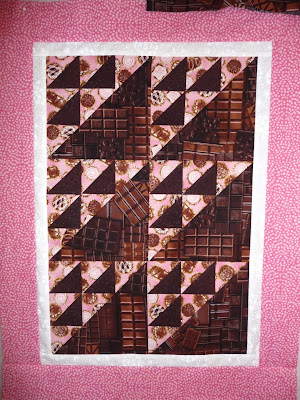 Another chocolate table runner, also not finished in time for gift-giving.  Plus, I need to order more of the chocolate bar fabric for the binding (see top right corner). 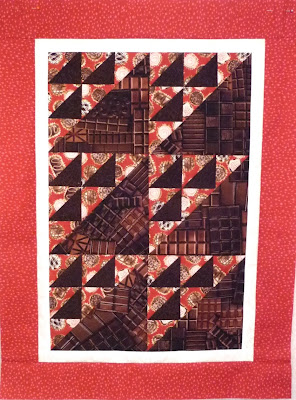 All three of these table runners were inspired by bonus triangles left-over from another quilt.  I learned a valuable lesson from this exercise - leave the bonus triangles loose (don't sew them into HST blocks) until you've decided how you'll use them.  Most of these bonus triangles were already sewn into blocks before I started the table runners, and I had to rip many of them apart to piece together the fabrics I wanted to use.

I STILL have enough bonus triangles left to make another Birds in the Air table runner! 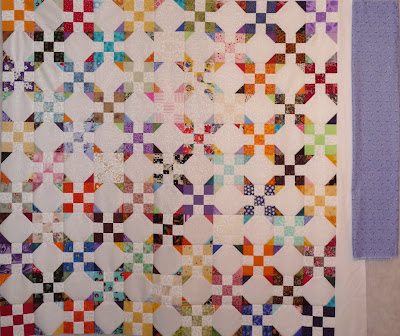 While I was piecing all those chocolate blocks together, I used the 9 patch and snowball blocks of this quilt as leader-enders.  Once the blocks were stitched into rows, it was a quick job to assemble the final top.  This is my 4th quilt top from the 2012 Rainbow Scrap Challenge.  I'm going to add a white border to give the blocks a "floating" effect.  I was hoping the light blue fabric being auditioned in the picture would be a good way to finish the quilt, but it's not quite what I had in mind.  I may go with my new favorite border treatment:  Freeform Scrappy Border, followed by another white border.  I also thought about a border of smaller 9 patches set on point, but honestly, I'd like to finish this quilt sooner rather than later!

I was also inspired to make one more Happy Scrappy House block with a Christmas theme, but after choosing my fabrics, I decided they all needed pre-washing to avoid the dreaded running red dye.  I guess stitching that block can be my reward later today for finishing my Christmas shopping!

Time has slipped away from me, as it always does between Thanksgiving and Christmas.  Two family birthdays, celebrations and socializing, shopping and cooking - plus work - it all takes me away from fabric therapy.   I think the last time I spent quality time with my sewing machine was the week before Thanksgiving!

I do have a few Rainbow Scrap Challenge loose ends to tie up before the end of the year, so I'll be posting some random Finished Objects as time permits. 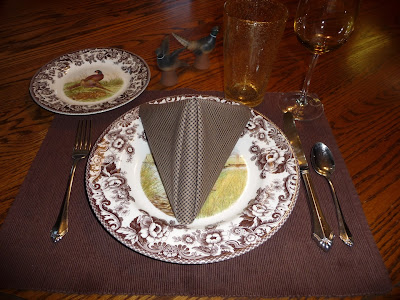 Once my kids left home, I decided it was time to use cloth napkins at mealtime.  Since it's usually only DH and I at dinner, we re-use our napkins for a week or so before throwing them in the laundry.  I've got a pretty good stash of napkins now, so if guests show up for dinner, there are always plenty of clean ones.  This brown checked fabric got pulled out of the stash for the November Rainbow Scrap Challenge color, and when I saw the date 1988 on the selvedge, I knew it was time to use up as much of the fabric as possible! 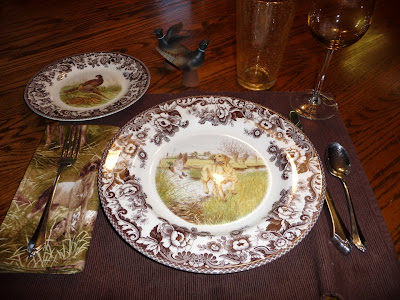 DH spotted this dog-themed fabric at Hobby Lobby and asked for some dog napkins.  They kinda go with my china, doncha think?

Napkins are easy sewing and make great gifts.  If you're feeling inclined, a good tutorial can be found here.

I never knew napkin folding could be so much fun - step by step instructions can be found here.