A few weeks ago, Kyle (Timeless Reflections) shared some of her quilts from the turn of the 21st century period.  (It's hard to believe that was almost 20 years ago!)  Her gentle admonishment was to remind everyone to label their quilts.

Kyle's retrospective got me thinking about quilts I had made during that same time period.  Exactly one quilt came to mind and I decided to get busy and document it before it vanished completely! 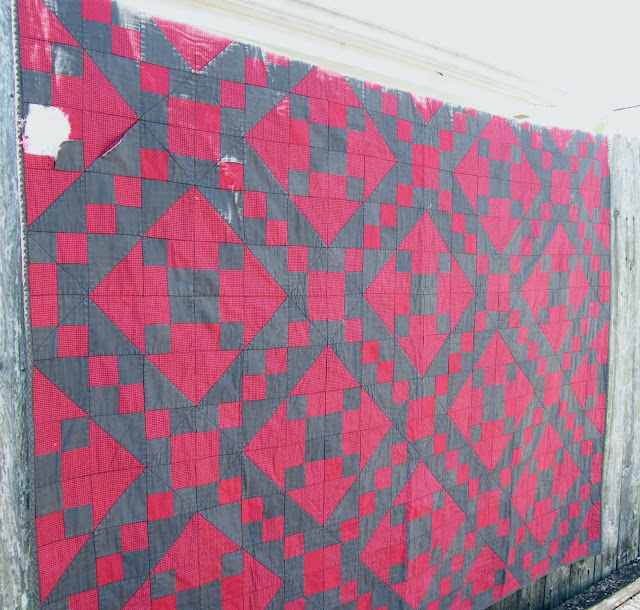 I made this Jacob's Ladder variation for my oldest son Andrew sometime around 1997-1998.  We had just moved to New Orleans and he had asked to paint his bedroom black.  I said "no", so we settled on dark red instead.  This quilt was made specifically for his room.

I made it entirely on my Singer 201 treadle sewing machine, which was new-to-me at the time.  It was my first quilt made completely on a treadle.  I even machine-stitched the binding to the back of the quilt (something I almost never do) just so I could get 'er done! 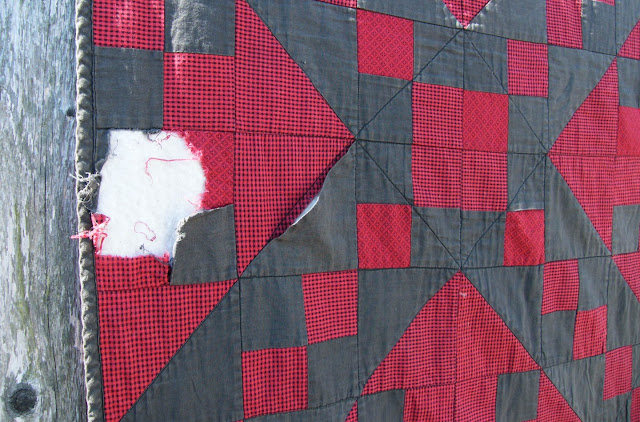 The quilt has gone from home to college to first apartment and now home again, since Andrew moved back in with us last summer (he's back in school).  Along the way, his dog, Moose, decided to try a few sample bites of the quilt.  I'm going to appliqué some replacement squares over the damage, and fix the loose seam. 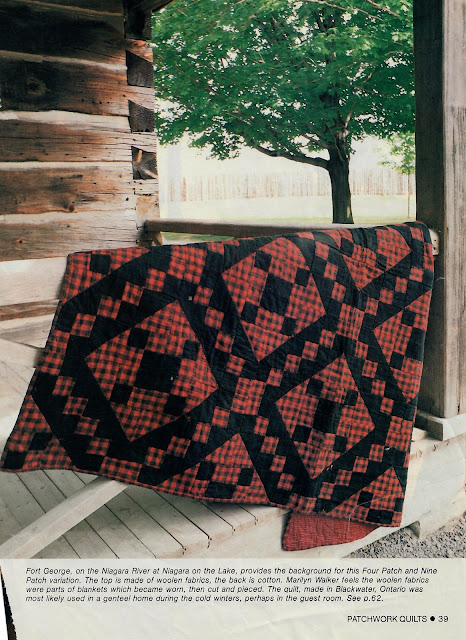 I liked the design of this quilt so much, I even saved the original pattern!  It's from Ladies Circle Patchwork Quilts, although I'm not sure of the date as I didn't save the entire magazine.  They called the quilt pattern Endless Chain. 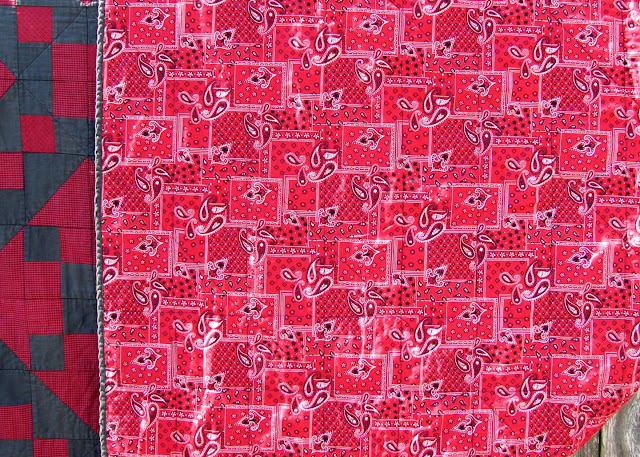 It's sad to see how poorly the black fabric in the quilt top has held up, but that's pretty typical of black fabrics from that period.  I used a bandana print for the backing and it has held up much better - the white streaks in the picture are the camera's reaction to sunlight, not wear in the fabric.  When I'm fixing the doggie damage on the front, I'll also add a small label to the back.  I don't know how much longer this quilt will hold up, but I'm gonna put my name on it anyway!

I have another doggie-approved quilt story, kinda scary, but with a happy ending. 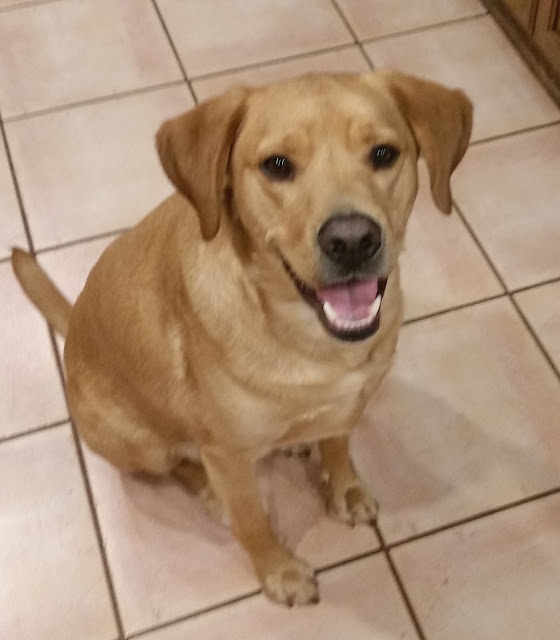 This is my son David's dog, Jozy Labradore.  Jozy and David live in Dallas, Texas, but Jozy spends part of his summer with us every year when David has to to be away from home for 6 weeks as part of his job.  In other words, Jozy is part of our family, too.

Last week, David inadvertently left a container of sugar-free gum on his bedside table.  Jozy does not usually chew on stuff he's not supposed to, but for some reason the gum got his attention.  David's roommate found Jozy an hour or so later, having seizures.  He took Jozy to the emergency vet's office and found out he had been poisoned by the xylitol in the sugar-free gum.  David was in New York City for work, so he was helpless and totally freaked out! 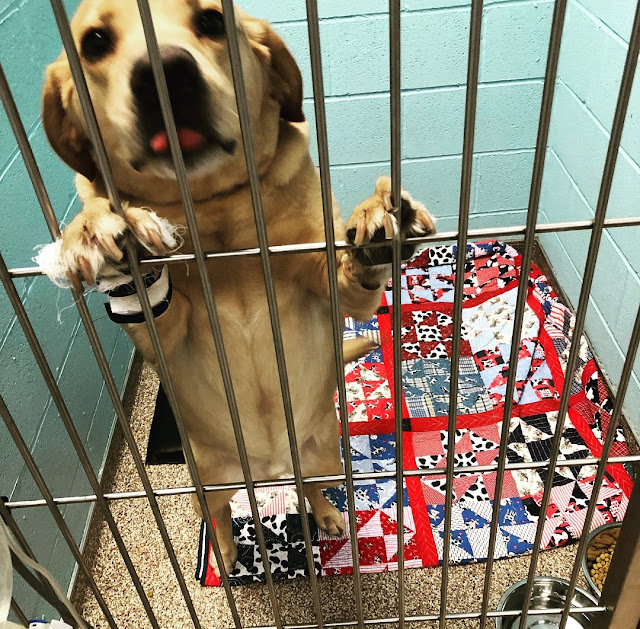 David was able to come home the next day, and immediately went to see Jozy and took one of my quilts along to comfort him.  Fortunately, Jozy responded to treatment (and the quilt!) and has since recovered and gone home.

As it turns out, xylitol is extremely toxic to dogs.  Even in very small amounts, it causes very low blood sugar, which can lead to seizures, liver damage and death.  The scary thing is, there are seldom any warnings about pet toxicity on items containing xylitol.  It's not just in chewing gum, but also found in toothpaste, mouthwash, sugar-free baked goods and even peanut butter.  Here's a link to a good article about xylitol and pets - it's a little long, but if you're a dog-lover, definitely worth knowing!

Pink is the color for this month's Rainbow Scrap Challenge.  I've scoured the bins of pink strips and squares and pulled some pink scrappy chunks from various drawers.  Blocks were made and parts and pieces assembled.  I'm getting anxious to finish up a couple of scrappy projects from last year, so I jumped ahead and made some extra parts and pieces as well.

First project:  use up some 1.5 inch strips to make 49-patch blocks.  I already had one pink block from last year, and I was able to add 2 more.  I'm waiting for the end of the year before I decide what to do with these blocks. 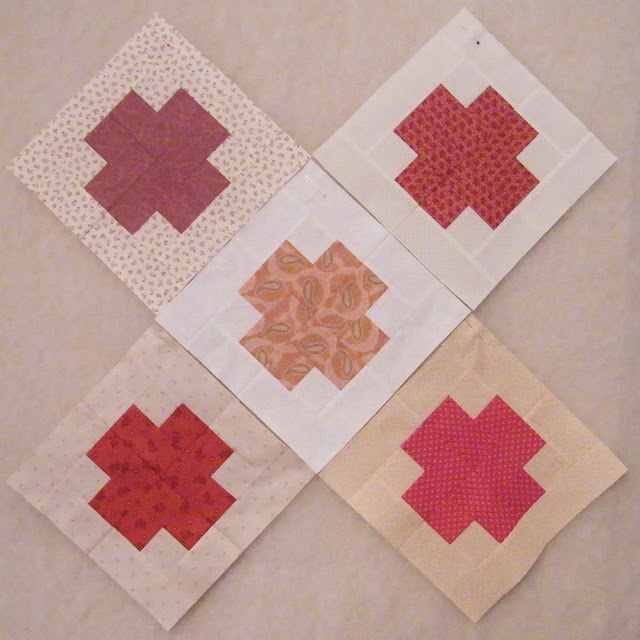 I started making these quarter square log cabin blocks this year using reproduction fabrics.  My original plan for these blocks was to make a straight set quilt, but maybe I'll reconsider and set them on point. 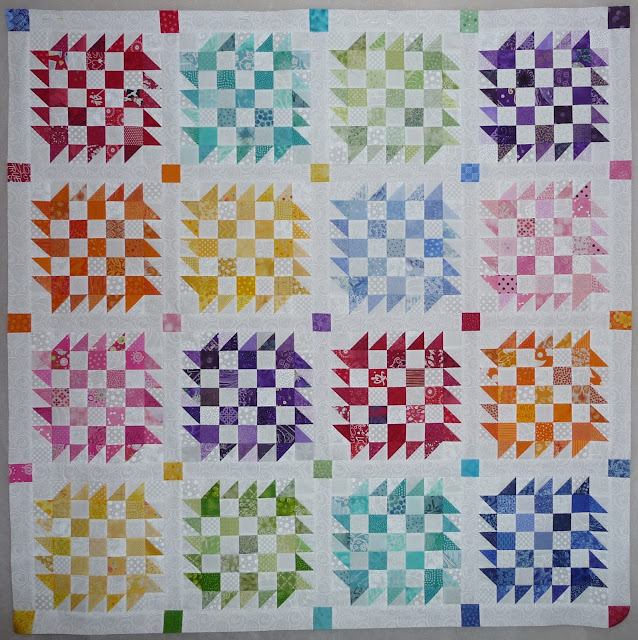 One of last year's RSC projects was based on Windblown Wishes, a quilt from Diane D. Knott's book, Scrap Quilt Secrets.  I decided to do an outer border of HSTs, and planned to make the HST parts each month as part of this year's Rainbow Scrap Challenge. 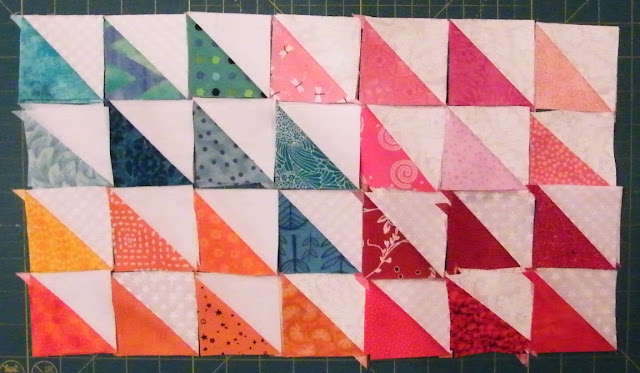 Since I had the box of 2.5 inch scrappy strips out anyway (for the pink HSTs), I went ahead and finished up all the remaining colors needed to finish the border.  I'm not sure when I'll get to start assembling this, but at least the HSTs are ready to go. 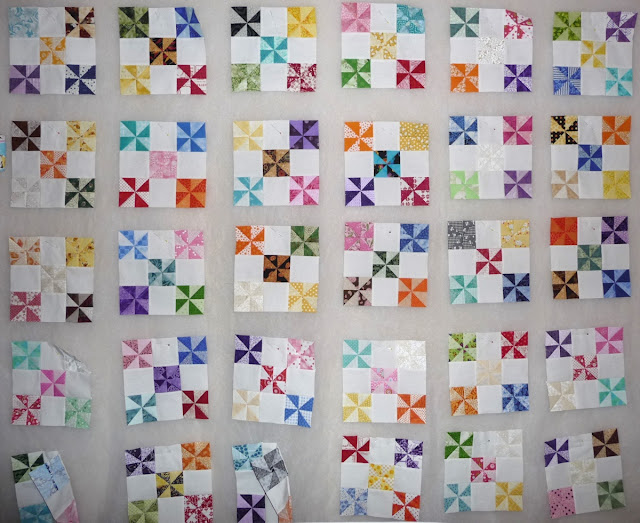 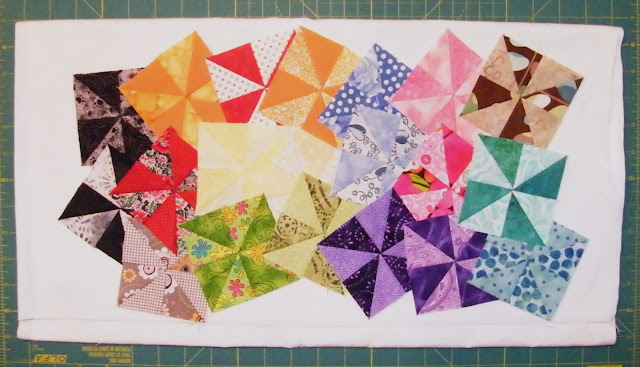 And now the cornerstone pinwheels are complete, so as soon as I cut the sashing, I can start assembling this RSC project!

If you love scrappy quilts, be sure to check out today's Rainbow Scrap Challenge link-up - lots of colorful inspiration!